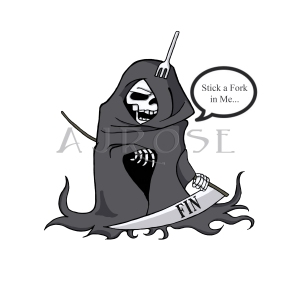 So I finished another book. Huzzah! And the appearance of Deacon is especially fitting for this one, since it concerns a grim reaper. I have quite a bit to do for it still, including a cover and blurb, but soon. A few weeks. To whet your appetite, here’s an excerpt after the jump:

Mitchell Seeker never expected to be struck dumb while running a simple errand on a random Tuesday. He planned to stop at the ritzy grocery store on Pine Street to meet someone, pop in for a heat-n-serve dinner from the deli, and spend a quiet evening with his dog Sadie and some Netflix.

Instead, he stood frozen by his car, watching the man of his dreams saunter through the automatic doors and disappear inside. Mitch’s mouth hung open. It was astonishing. It was life-changing. It was completely unexpected.

The lightning bolt that struck and killed Marianne Carelli, however, Mitch did expect.

Snapping his jaw shut, he shook himself. Drool over someone later. You have work to do.

The swollen clouds that had built all afternoon finally erupted like a water balloon filled beyond capacity, sending people scurrying for cover in their cars or the store. That’s when Mitch saw her. Marianne was a middle-aged woman with pretty dark hair being quickly plastered to her head as she struggled with an uncooperative umbrella. She was the only one not running, though Mitch gave her another twenty seconds before she gave up and was lost to him inside the store. He had to hurry.

“Can I help you with that?” His smile was at its most disarming as he reached for her umbrella, giving her no chance to protest in case she recognized him. He wasn’t exactly the person the residents of Caperville, Colorado went to for help.

“Thank you, but I—” she protested.

Mitch gave the umbrella a shake and jammed the pointy end straight down on the asphalt, jarring loose the jam in its mechanism. He flipped it upright and opened it with a flourish, the catch taking hold with an obedient click.

Marianne didn’t immediately take the umbrella, so he smiled again, grabbed her hand and wrapped it around the handle. As he did so, the part of him there to meet Marianne engaged and his fingers warmed where her skin touched his, the tips glowing a brief red only he saw.

“Thank you,” she said, her surprise at having a perfectly normal encounter with one of the Seekers plain. Or so she probably thought.

“Stay dry, now,” he said, tipping an imaginary hat and turning toward the doors. He hurried away, though not to escape the rain; he was already soaked to the skin. No, he didn’t want to be standing too close to Marianne now that his job was complete. He had to remain inconspicuous.

He made it to the overhang of the roof and stopped to wring out the bottom of his shirt, facing the parking lot. Thankfully there were no other bystanders when lightning forked from the sky and straight into the tip of Marianne’s umbrella. The flash was too bright for him to see her at the moment of death, but sparks cascaded to the ground as she fell, like glitter rain celebrating her spectacular end.

Honestly, Mitch thought it was beautiful, though he’d have never said so aloud. People in this medium-sized town sheltered by mountains thought he was creepy enough, despite his innocuous looks. He wouldn’t add to that.

Marianne’s soul stood at his side, ethereal and stupefied.

“Hi again,” he said softly. “Let’s go inside before it gets chaotic out here.”

A shout sounded from the nearest row of cars and he didn’t wait around for them to see him darting into the store. His charge followed obediently like he knew she would. For however brief a time, she was bound to him.

He scurried into the organics and gluten-free aisle before anyone placed him near the scene of another death. There were enough rumors about him and his family. Some made him laugh. Most made him sad while reinforcing that which he already knew: he was better off keeping to himself as much as he could. Alone was safest.

Marianne followed along like a helium balloon on a string while he picked up some fried chicken and mashed potatoes from the deli for hid dinner. For reasons he didn’t understand, souls couldn’t speak, though they could hear and understand perfectly fine. That suited Mitch, who was always patient answering questions for the newly dead, instinctively understanding what they’d want to know most without having to listen to baseless accusations that he’d caused their deaths.

He hadn’t. He was merely the grim reaper who harvested their souls and led them to their next stop.