Now that I’m back home, have a couple days’ rest under my belt, and have had time for reflection, I figure after all the handwringing I did over going to my first convention, I probably should say something about how it went.

In a word: incredible.

Our intention the first day, Friday, was to arrive in Bristol around 4 or 5 pm, register, and poke around the hotel and neighborhood, maybe have a drink with a few people inclined to hang out with us in the hotel bar, and get a good night’s sleep for Saturday, the heavy duty day of the con.

Traffic had other ideas. 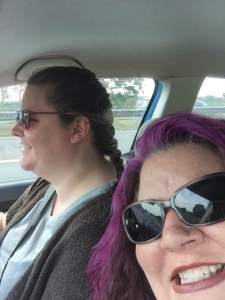 What should have been a 3 1/2 hour drive turned into 6, and we missed registration, so walking around the hotel without our names hanging from lanyards around our necks made people somewhat hesitant to approach us. Given that I’m a wuss when it comes to being the first to say hello, Friday night ended up being somewhat quiet. Other than a quick hello with Dani Elle Maas in the bar as we were leaving to find food, we saw a couple faces I thought were familiar from their Facebook profiles, but I wasn’t sure. We walked up the street to a tapas place for dinner, then returned to the hotel.

Saturday was organized chaos. Between registration, getting all our swag to the right place before the deadline, getting our book fair items gathered and prepared, prepping for our round-table discussion on Body Language and its use in fiction, and attending a couple panels ourselves, there was not much down time. I was particularly grateful, because it didn’t give my brain a lot of room to freak out over the details, especially since I’d had a crappy night of sleep the night before.

That intimate setting the previous attendees have described for this con in the past? Totally true. There were a lot of people (to me, anyway), but I didn’t feel as overwhelmed as I expected to. There were certainly squees at meeting people in person who I’d only talked to online (Helena Stone and Hanne Lie come immediately to mind, as does KC Wells), and a lot of laughs both in the talks and panels and outside in the chat areas. There were also a lot of people I feel I missed the chance to chat with, where we’d make eye contact across the room and I’d make a mental note to try and get over there to say hello, but it just never happened. That’s my biggest regret, that I didn’t stand still long enough to catch up with everyone, but such a thing is impossible.

Though I was nervous about our discussion on body language, I felt like Kate and I did pretty well going over what we both know collectively on the subject (which is to say nothing formally trained, though we’re both well-read on the matter). It didn’t end up being us staring at a few faces that only stared back waiting for us to say something. *blink blink* That would have been horrible. But no, we had lively people dropping by for the discussion, who asked questions and made their own observations, and it turned out to be quite fun, actually.

Saturday night, we attended the Gala dinner where we were regaled by the Sing Out Bristol choir (a highlight of the whole weekend for me, along with meeting Garrett Leigh, who is badass and so much fun), a fabulous drag queen act, Mary G., who unfortunately got upstaged by four men (barely) dressed as waiters wearing nothing more than aprons, bow ties, and wrist cuffs. Yup, their asses were hanging out. To be fair, Mary G. was just as interested in the waiters as some of the attendees.

Witness my first ever public selfie

There was, however, a conversation where Kate told me, “Don’t lean back even an inch, or there will be penetration,” given how close one of them was standing behind me. Lane Swift had quite the laugh at the look on my face after that. While I’m ALL FOR the beauty of the human body, my personal space issues are still in play. It was around then, when dessert was wrapping up, that people began to rise from their tables, mingle, take photos with the entertainers, and otherwise loom that I began to feel the walls closing in. We bid the others a good evening and found a quiet balcony for a couple of drinks and some good conversation with people who rotated outside for some fresh air (and regaled us of the events inside, specifically when a flash mob broke out).

The excitement and poor night of sleep caught up with me, and Kate and I retired to our room, where my overtired brain kicked my mouth into high gear and she and I ended up talking until 2 in the morning. I’m like a toddler denying I need a nap. Pretty sure by that point, Kate was ready to call down to the front desk for some duct tape to shut me up.

The last day was more leisurely, and we attended one panel called Unlocking Your Dark Side, which had me cackling and plotting evil plots of evil the whole time. At the end, there was the farewell speech, and Kate and I had to cut out early in order to make it back in time for our dinner reservations with her family, so we didn’t get a lot of chance to say goodbye, other than a few quiet waves to now-more-familiar faces dotted around the tables.

Number of times I had to hide: none, though it was a near thing in the height of it all

Number of panic attacks: none

Number of times I surprised myself with how I was able to let my guard down: more than a handful. The book fair was a good example; I didn’t feel awkward or shy talking to people coming over for books or buttons. It was crowded and I didn’t feel the need to run (which could be attributed to being at a table at the edge of the room, so we weren’t in the thick of everything). Also, I almost hugged someone (Garrett Leigh), and I hadn’t even had anything to drink! I’ve said before though, I never know until the moment the situation arises if I’d be comfortable with that or not. That time, I probably would have, though she caught herself and both of us got wide-eyed when we realized what had almost happened. Kate teased me mercilessly, questioning whether or not she should worry my fangirling was developing into more and she’d have to send out a search party for me in case I ended up stowing away in Garrett’s suitcase.

All told, the weekend was a raucous success and I firmly and thoroughly gave my anxiety a gigantic “fuck you.” Also, Kate and I got our first professional picture together done, taken by Temple Dragon, whose laughter and professionalism were unparalleled in putting us at ease.

This one’s going on the wall.

ETA: Still freaked putting my face out there, but total immersion at the Meet worked for some of my other issues, I’m hoping to do the same with this one thing.